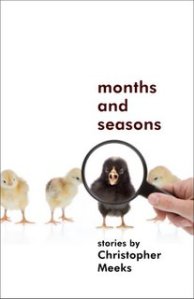 Christopher Meeks, a wonderful author whose books I’ve had the pleasure of reviewing twice on this blog, has just been nominated for the prestigious Frank O’Connor International Short Story Award. Leading names on this year’s list include Booker winner Kazuo Ishiguro, Orange Prize winner Chimamanda Ngozi Adiche, winner of the (British) National Short Story Award and former judge for the Frank O’Connor Award James Lasdun, multiple prize-winning poet Sean O’Brien and previously short-listed authors Philip O Ceallaigh and Charlotte Grimshaw. The collection for which Meeks is nominated, Months and Seasons, contains a dozen stories. With a combination of main characters from young to old and with drama and humor, the tales pursue such people as a supermodel who awakens after open-heart surgery, a famous playwright who faces a firestorm consuming the landscape, a reluctant man who attends a Halloween party as Dracula, and a New Yorker who thinks she’s a chicken.

Congratulations, Chris! To think — we knew you when!