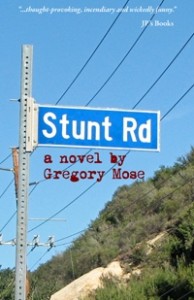 What is Stunt Road about, and what inspired you to write it?

Stunt Road is the story of Pete McFadden, an unemployed computer graphics designer who cynically invents his own system of fortune telling. When “Horokinetics” unexpectedly takes off and becomes the next “big thing,” Pete stumbles into web of corporate greed and personal betrayal that threatens to turn his harmless prank into a dangerous psychological weapon he can no longer control. It’s Frankenstein for the digital age.

The book is the result of a conversation I had at a new age themed restaurant in Los Angeles – my family and I started speculating on ways to mimic the supposed accuracy of astrology, and gradually I began to imagine what might unfold if I were to actually invent my own system of fortune telling. Using the idea to satirize corporate marketing cynicism and human gullibility just sounded like too much fun to pass up.

For me the greatest challenge in writing is getting momentum. I’ll spend months dithering and outlining before committing a single word to paper. Once I’ve got the ball rolling on whatever particular project I’m working on, the writing seems to happen automatically. But keeping that momentum is a Sisyphean task, so in practice I produce text in bursts, punctuated by periods of gloomy distraction. Hardly an advertisement for the writing life…

Your day job involves running a small holiday cottage complex in the French countryside. How do you balance work and writing?

Precariously. In summer, our tourist season, I am occupied more or less full time with looking after our guests, fixing toilets, mowing grass and pretending to be charming. In winter I get up very early, when I can bear it, but then writing has to compete with cutting firewood and maintaining our seven acres of woodland and fields. It’s a wonderful life out here in the middle of nowhere, and about as far from the LA suburbs of my childhood as one could get. But I get a lot of people asking what I do all day, imagining perhaps that we sit around drinking wine and watching sheep. The fact is, this country living business is hard work.   And of course when you work from home, when you are your own boss, it requires some discipline to write instead of doing other “more important” things like making coffee… or making money.

You make no apologies for self-publishing your book. Why did you decide to go this route?

In my case the decision was a combination of circumstances and character. I have a knack for bad timing, and I contrived to finish my final edits just as the world economy was collapsing and book publishers were announcing their utter lack of interest in publishing fiction by obscure first-time authors. I sent the manuscript to a few agents, but quickly concluded that in the current climate I was wasting my time. But I’m also a contrarian by nature, and the idea of going it alone appealed to me. Having total control of the fate of my novel is both challenging and satisfying. And I get a lot of mileage out of grumbling about those big bad publishing companies and how I didn’t sell out to the Man.

What kind of editorial process was involved? Did anyone else look at the manuscript before it went to press? A writers group, for example, or a professional editor?

My wife and I are both lawyers by training, so we’re both used to editing text to a ridiculously high standard (an inadvertent double space between words can get you twenty lashes in a big corporate firm). I also was lucky enough to have a team of willing volunteers in a variety of professions who went over the manuscript with a fine-toothed comb.

What kind of feedback have you gotten regarding the book?

I’ve had great reader reviews but, as is the case with most “indie” authors, frustratingly few professional reviews. The biggest criticism has been that the main character is somewhat infuriating. He is lost, and only begins to find himself towards the end of the book. Most readers are able to forgive him his faults as he slowly struggles to accept responsibility for his actions, but others judge him more harshly. He is deeply flawed, as are we all. If you have little tolerance for human weakness, it’s not the book for you.

Anyone who doesn’t take him or herself too seriously should enjoy Stunt Road. The ideal reader for this book is someone who instinctively questions the world around us, who can laugh at the human condition, who isn’t too quick to judge others, and who isn’t convinced that he or she has all the answers. I write for people who can appreciate just how awful this world can be, but who refuse to let that quell their sense of humor.

What are you working on now?

I worked with refugees for a couple of years in West Africa in the late 1990’s when the civil war in Sierra Leone flared up again. I’ve carried those experiences around with me for a decade now waiting to feel ready to write about them. So I’ve recently begun a novel loosely based on what I saw there. It will be much darker than Stunt Road, but still, if all goes as planned, retain a sense of humor and of hope.

The nearest pop-culture cousin to Mehrdad Balali‘s Houri I can think of is Persepolis, the graphic novel by Marjane Satrapi, which, like Houri depicts the fallout of Iran’s Islamic revolution in poignant, personal detail. A few things, however, set these two works apart. The first and most obvious is the medium; Satrapi’s somewhat whimsical illustrations make for a mostly palatable examination of the 1979 revolution, whereas Balali’s prose paints a stark but no less engaging portrait of Iran in the wake of the same event. Additionally, there’s the difference in gender between the narrators of each work, yet even here, there are more similarities than differences insofar as both narrators are simultaneously trying to balance their growing awareness of the political changes afoot in their lives with the equally powerful forces of nature that are making them increasingly aware of the opposite sex. The biggest distinction to be made between these two works, however, is that where Satrapi’s focus is largely on the revolution and its aftermath, Balali’s novel shuttles between pre- and post-revolution Iran with an unrelenting eye for detail. What emerges from Balali’s investigation is (for lack of a better phrase) a tale  of two cities, both rife with corruption, each painfully human in its own way.

The novel opens with its narrator, Shahed, returning home to Iran after a number of years abroad in America. While he was gone, his father passed away, and Iran underwent a massive cultural and political shift. As Shahed walks the streets of the “new” Iran, he wrestles with the ghosts of his past. Given the rampant corruption of Iran under the Shah (as embodied more personally by Shahed’s father and the motley crew of stooges he calls friends), any change from the status quo of the narrator’s childhood would seem like a godsend. The only problem is that the revolution has placed too much emphasis on its unforgiving conception of “god,” sending the citizens of Iran into a tailspin of repression and joyless piety.

Throughout the novel, Balali depicts the cultural impact of the Islamic revolution vividly. One notable example of this occurs early in the narrative when the narrator visits a once-bustling amusement park, the walls of which bare “paling images of Disney characters, along with the scars of bullets and tiresome political slogans.” In this image, Balali gives us the past and present simultaneously–the death of fun in the name of religious devotion.

The narrative itself is also complex. In effect, we’re given three versions of Shahed–the young child living in pre-revolution Iran, the sullen expatriate living in America, and the mature narrator striving to understand both of his former selves as their tales intertwine and comment upon each other. Ultimately, the lesson the narrator learns is one of forgiveness: though the crimes of his late father are, from Shahed’s perspective, heinous, the narrative force of the story pushes him toward a realization that to hold on to his bitterness–that is, to refuse to forgive–is to repeat the crime of the repressive revolution he so despises. In order to live, he must at once acknowledge his ambivalence toward his father and, in so doing, forgive his own flaws, which is also to say that he must recognize his own humanity.

Houri is a wonderful novel. Even as it provides valuable and much needed information to Western readers about a world that is, ironically, so present in the headlines and absent in any meaningful way from our collective understanding, it reminds us that humans everywhere have so much in common: greed, lust, yearning, heartache, joy, generosity, and love. And, perhaps most of all, the capacity to forgive.

I first became aware of the writing of Christopher Meeks when I read his wonderful short story collection Months and Seasons. Now Meeks has come out with a stunning debut novel titled The Brightest Moon of the Century, and I have to say that I’ve gone from being an admirer of his work to a full-blown fan–bordering, perhaps, on groupie.

As with Months and Seasons, Meeks’ attention to character and setting in Brightest Moon allows him to capture the angst, uncertainty, and joy of the human condition in all stages of life in vivid detail, but his move to the realm of the novel has allowed him to explore all of these emotions in more detail and greater depth than in his earlier fictional outings. The novel follows the life of Edward Meopian from the death of his mother at an early age through the perils of young adulthood and into the uncertainty of early middle age. What motivates Edward throughout the novel is what I daresay motivates most us: a desire to find a place where we fit in, a desire to find a home in the world, a desire, in short, for love.

Edward’s quest speaks to the hyper-mutability of postmodern life; professionally, he goes from being a college student to working part time in a Los Angeles camera shop to managing a minimart in Alabama to attending film school back in California. Along the way, he falls in and out of love, faces down a hurricane, gets shot at, and watches helplessly as his car explodes in a ball of flame. That this isn’t a thriller, however, underscores Meeks’ talent as a writer: he finds adventure and excitement in the otherwise mundane details of day-to-day life and, in so doing, demonstrates that Edward’s world, like our own, has infinite potential to surprise and delight us. We just need to be open to it.

Overall, The Brightest Moon of the Century is the work of an expert storyteller. The characters come alive, the writing sparkles, and the story of Edward’s journey rings true through every twist and turn. A great and truly humane novel in the tradition of Charles Dickens and John Irving.

For a chance to win a free copy of The Brightest Moon of the Century, check out Christopher Meeks’ recent interview with BackWord Books.