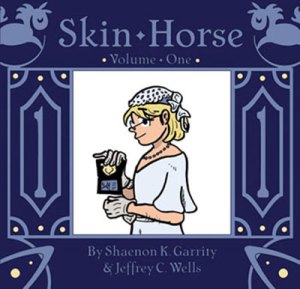 I knew I was in trouble when the characters from Skin Horse started invading my dreams — this after a long day of battling cold symptoms with various over-the-counter remedies and topping the evening off with a healthy dose of NyQuil. Even without medication, however, I imagine it wouldn’t be too hard for the characters in this web-comic-turned-graphic-novel to insinuate themselves into my psyche. They’re a little bit loopy, somewhat dirty-minded, occasionally violent, and on a mission from the US Government to integrate sentient non-humans into society at large. The only problem is that the non-humans tend to resist the team’s efforts with a vengeance. Take, for instance, the case of the helicopter with the human brain: He didn’t ask to be made into the perfect killing machine; life just dealt him a strange hand. So who can blame him for resisting a little when the Skin Horse team — which, by the way, consists of a talking dog, a rampaging patchwork zombie girl, and a cross-dressing psychologist — arrives at Area 51 to convince him to take a job flipping burgers at Arby’s? (Okay, so they don’t actually suggest the Arby’s job, but given the work that they’ve found for their other clients, which include a talking lion and a small army of killer robots, it isn’t much of a stretch.)

As bizarre as it is, Skin Horse is also funny and smart, with hints of Jonathan Swift’s keen sense of satire (not to mention his penchant for the absurd) and Neil Gaiman’s playful faith in magic of all forms. Among the sentient non-humans the team encounters over the course of their adventures are a race of opera-loving silverfish, a tribe of centipedes gifted in handicrafts, and an overbearing crystalline intelligence with a talent for political machinations. That they’ve all been living for years beneath Skinhorse HQ without any members of the team being aware of it only underscores the subtle (and not-so-subtle) jab that authors Shaenon K. Garrity and Jeffrey C. Wells are making at both governmental bureaucracy and the human condition: stuff gets done despite, not because of, our greatest efforts to do it.

Artistically, the comic strips that constitute Skin Horse are a cross between Doonesbury and Tintin, with a slight manga flare that lends itself nicely to the tongue-in-cheek violence of the proceedings. What’s more, Garrity and Wells work wonders with the daily strip format, extending the premise-setup-punchline formula of gag-oriented strips to monstrously ludicrous proportions as each day’s joke builds upon the last to create teetering narrative towers of Rube Goldberg proportions. To put it another way, as the plot lines grow more ridiculous, the story gets better and better. The only problem, of course, is that I can’t figure out how to get the crazy buggers out of my head.