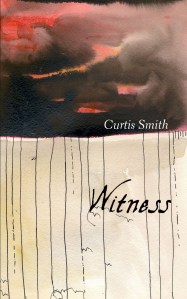 Three years ago (almost to the day, give or take a week or so), I started this blog immediately after putting down Curtis Smith‘s collection of short stories, The Species Crown. The collection was so good — so thoroughly enjoyable and moving — that it turned me not only into a fan of Smith’s work, but a fan of the small press movement in general. Since then, various small presses have put out two novels by Smith (Sound + Noise and Truth or Something Like It, both from Casperian Press), another short story collection (Bad Monkey from Press 53), and now Witness, a collection of essays from Sunny Outside. The phrase hardest working man in bookbiz comes to mind.

Witness finds Smith exploring many of the themes that make his fiction both so endearing and so real. It turns out that Smith — like many of his characters — is a dedicated family man and educator. His essays touch on work, fatherhood, tattoos, art, literature, music, life, death, and everything in between. Through it all, Smith proves his talent for finding epiphanies in the quotidian details of daily life: the promise of adventure inherent in the smile of his young son’s toy giraffe, the squandered potential of an errant student as signified by the empty chair where he used to sit, intimations of mortality in the warm sanctuary of an ATM kiosk on a wintry day.

Perhaps it’s the fact that Smith is both an educator and an author that makes his writing so good. In a piece titled “The Borders of Diane Arbus,” he notes that although he’s far from perfect as an educator, it’s his imperfections that compel him to keep working at his craft: “Twenty-five years, and I still make mistakes, failing to decipher the hints laid before me. Despite my daily stumbles, I don’t divert my eyes, knowing a signal may wait in the next furrowed eyebrow or curled lip.” What becomes clear throughout the collection is that Smith’s constant attention to detail applies to reading not just his students but the world at large.

A moving and insightful collection, Witness does a wonderful job of shedding light on the miracles that occur daily in our imperfect world.