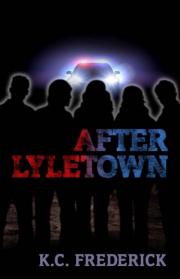 In After Lyletown, K.C. Frederick presents the story of Alan Ripley, a man in search of a defining moment. The trouble for Ripley is that while his small circle of radical friends was busy botching their own version of a political revolution in the late 1960s, he was laid up in the hospital with appendicitis. As a result, Ripley missed out on a robbery that got one of his friends killed, landed another in jail, and sent the rest into hiding for the remainder of their lives. As a result (and despite his best efforts at putting the past behind him), Ripley spends the better part of the next two decades wondering what might have happened if he’d been in good health on the night of the heist. Would he have gone through with the plan? Would he have kept the plot from unraveling? Or would he have ended up dead, in jail, or on the run like the rest of his crew?

When his friend and co-conspirator Rory Dekker turns up after completing a twenty year jail sentence, all of Ripley’s questions and insecurities come boiling to the surface. Complicating matters is the fact that Ripley has made a comfortable life for himself. He has a law practice that pays the bills and, more significantly, gives his life a sense of purpose. He also has a wife and son who know nothing of his revolutionary past. Within this context, Dekker’s return presents a series of related quandaries for Ripley, not the least of which is reconciling who he is with who he used to be, all the while seeking the moment that will allow him, once and for all, to define his life.

Throughout the novel, K.C. Frederick proves himself a genius at engineering suspense. His preferred modus operandi is to lull his readers into a sense of complacency by offering stretches of calm that threaten to give way to calamity at any moment; whenever a sense of domestic bliss begins to settle over Ripley and his family, the proverbial other shoe is hovering somewhere nearby, waiting to drop as it inevitably must. What’s more, Frederick also endows his protagonist with a contemplative bent that takes Ripley beyond the realm of the merely sympathetic and into that of the philosophical.  Indeed, what separates After Lyletown from other novels of its kind is that Ripley’s dilemma is as much about evading the ghosts of his past as it is about searching for meaning amidst the chaos of life in the present. A profound, thoughtful, haunting tale.