Erica Kaufman’s poetry collection Censory Impulse opens with a stanza that reads, “first i think i need/to come to terms/with amputation.” Pregnant with possibility, this opening sets the perfect tone for what’s to follow: a series of meditations on loss and absence. Indeed, the idea of coming “to terms” with amputation and all that it implies is at the heart of this book, as struggling over terms—which is to say words—is much of what Kaufman does throughout the volume. Words, of course, carry meaning in this collection, but they also frequently and purposefully fail to do so. They are, in a way, amputated or cut off or at least distanced from immediate meaning, as when the poet writes, “past sorrow ripening allegro/often easy to learn on a door/the scaleability appealing/in my own jaundiced way.” Individually, the words have meaning, but in context, they struggle against each other until meaning is, apparently, eviscerated, thus forcing the reader to meditate further both on their relationship to each other and the ways in which language itself works: words fail, at times, but in their failure, we create and discover new meaning. And in the absence of meaning, in the failure of words, in the disjuncture between the terms we use and what they pretend to mean, we struggle to find new language and new modes of expression. In Kaufman’s words, “i don’t stand/for vocabulary only.” And neither should we, if this challenging yet engaging collection is to be believed.

Tom Mahony’s well-crafted book Flooding Granite details the life of a river guide named Zack as he maneuvers his way through dodgy excursions in the Sierra Nevada (both natural and social). Furthermore, he becomes increasingly haunted with the guilt of abandoning his child and girlfriend in the name of “freedom and adventure.”

Regret seeps from his pores as he reflects on this mistake in an almost reverse mid-life crisis: “Over the last year he’d sampled the joys of bachelorhood and spontaneous philandering. He’d enjoyed the life for a few months, but the hedonism had turned stale and pointless. As the year passed, he’d realized with building certainty that he’d made a horrible mistake—a tragic blunder, caught too late.”

So Zack trudges forward with his life, this time into the Sierra Nevada with a group of professional guides and civilian clients where they meet an array of challenges such as inclement weather, injuries, treacherous rapids, and dwindling supplies.

This novel has an earthy and contemporary writing style that reminds me of writers like Norman Maclean and Jim Harrison: “Sunlight washed over his face. Wisps of cirrus drifted east, a golden eagle left its pine-snag perch and flew upriver. Paintbrush, lupine, clarkia, and mariposa lily dappled the drab green slopes with color. A black bear and two cubs loitered in a riverside meadow, watching the rafts for a moment before shambling off into the bracken.” Cross that style with the adventure and suspense of a film The River Wild and you have Tom Mahony’s novel Flooding Granite in your hands.

This title will release over at Casperian Books on October 1st, 2011.

R. Frederick Hamilton’s Should Have Killed the Kid evokes distinct shades of Abraham and Isaac, as both stories are about sacrificing a child to avoid the wrath of an other-worldly and seemingly irrational power. In this case, however, the protagonist, Dave Thomas, fails to make even a token gesture toward killing the kid in question, and the result is Armageddon. The only solution? Another stab at infanticide.

Despite its bleak subject matter, Should Have Killed the Kid is an engaging and entertaining novel, a curious mix of Douglas Adams and Philip K. Dick. The characters are strong and well-rounded, the humor dry and subtle. Additionally, while Hamilton has many talents on display in his latest outing, the strongest among them is his ability to conjure a believable — and palpably oppressive — universe. The highrise office building that serves as the last bastion of humanity comes across as fittingly claustrophobic as it is self-contained, and the rundown resort where the hero first meets the man who appears to be the devil incarnate feels like a cross between the Bates Motel and the Overlook Hotel.

If I have a complaint at all, it’s that the book could have used a stronger copy-edit. Granted, books that come my way are usually marked with a disclaimer warning that I’m about to read an uncorrected proof and should bear that in mind when I come across any and all typos, but this book didn’t come with such a disclaimer. My best guess, then, is that I was reading a corrected copy and that a large number of typos made it through the editorial process — a fact that caused some degree of distraction while reading the novel. Overall, though, the narrative is strong, and Hamilton is certainly a novelist worth watching. 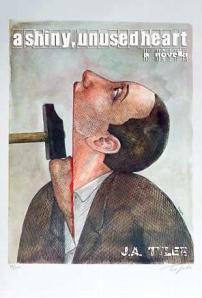 To me, J.A. Tyler’s novella A Shiny Unused Heart is an in-depth depiction of a man who loses his sanity the moment he hears he is a father to be. This book is hardly an easy read as it contains the incessant despair and hopelessness of a man who sees the conception and birth of his child as a death sentence. At times, his madness runs so deep, I swear I’m reading bits of Scott Peterson’s journal entries, as if a Chappaquiddick Incident is lurking right around the corner.

The novella opens with an unnamed protagonist in the heart of his conflict, teetering on the edge of suicide, or maybe psychosis. One page later, the book flashes to the beginning of this man’s journey where he appears to be quivering like a fifteen year old girl with a pee stick’s plus sign in hand: “Her, pregnant. Him, seeing himself falling away. Seeing himself falling down. Seeing himself tumbling. He sees it as a film reeling in his mind, a stumbling bouncing fall. Head. Knee. Ankle. Arm. He hears his bones breaking. He hears his bones crunch. He sees the world in trip, trip, fall. He flips and cartwheels, lands, splashing like dimes. His body shatters. Pieces swim in the tile and the perfect lines of grout. He is screaming and pushing. A body flies from his body.”

Though Tyler writes in poetic prose, at times, the melodrama (images of a horrific crash, being held hostage, suffocating in a coffin) becomes a bit overwhelming and takes away from the severity of what he’s trying to convey. “Ramming, running, he pushes off, trying to close an unclose-able door. He turns a key and an engine again. Towing his own heart behind him with a chain the size of the world. With a chain that fits in the palm of her hands. Straining against the friction of their bodies. Thighs on thighs. The asphalt black in his pupils, the way lust hovers, heatstroke waves riding the surface, surfing. Rolling. Surfacing only now and again. Surfacing, fireworks outside a tepid window. Chimes, bells, bliss, glory. A sun sized universe, lowering itself onto their backs, making them glow.”

Seasoned with the dark essence of Bukowski, J.A. Tyler harbors a dismal narrative voice all his own.  His prose is rich with analogies and raw emotion, his underlying motive laid out in a series of short chapters, think Ben Tanzer’s short and impactful style. A Shiny Unused Heart is an imaginative novella with a unique and contemporary perspective. It is currently available for purchase over at Black Coffee Press http://www.blackcoffeepress.net/