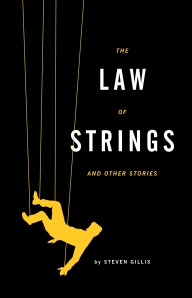 Physics, gravity, string theory, attraction, and repulsion are all at play throughout The Law of Strings, a collection of short stories by Steven Gillis. The book’s theme and tone are reminiscent of early Thomas Pynchon — bizarrely clever tales that are as much about human relationships as they are about the frontiers of speculative science. Hints of Samuel Becket and contemporary author Max Barry are also present, as in a short story titled “What We Wonder When Not Sure,” which finds a pair of businessmen working for a company whose purpose is largely unknown to all it employs, but which promises to reveal itself eventually. Other stories find characters struggling to make the best of situations that range from the improbable to the impossible, usually with comic effect, and never with ease: A couple frees the denizens of an overcrowded dog shelter only to realize that they haven’t thought the situation through as thoroughly as they might have. A man with the power to levitate meets a woman whose density renders her immobile. A bookstore owner discovers a mysterious door at the top of a flight of stairs while trying in vain to convince his girlfriend that they should take their relationship to the next level. What emerges as the stories pile one upon the next is the intimation that life can be flawed, maddening, and nearly inexplicable but ultimately and unquestionably worth living.