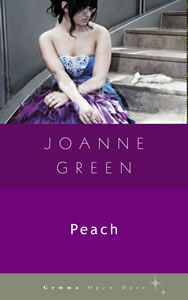 Brief but thoroughly engaging, Peach by Joanne Green is the story of a young high school student struggling to come of age in the late 1960s while simultaneously working through the horror of what she uneasily calls “a rape thing.” What makes this story especially memorable is the voice of its narrator, Peach Sweeney. Growing up in an age of rapidly changing attitudes toward sex, drugs, and politics, Peach comes off as a latter-day female Holden Caulfield as she longs to march on Washington DC but gets stuck attending a button-down prom with a distant cousin. Also note worthy are Peach’s pithy turns of phrase. Her cousin’s old Thunderbird, for example, is described as a “four-wheeled saddle shoe,” while all of the boys at the prom “look like Easter eggs” and their dates “like toaster dolls.” Yet as witty as Peach is, the novel proceeds with the kind of sad, loving gravitas that naturally attends the loss of youth and coming of age. The result is a tiny book that is as charming as it is moving.