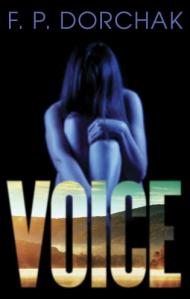 In Voice, FP Dorchak returns to many of the metaphysical themes he has explored throughout his other works, but he does so in a megaphysical, not to mention sexually explicit, way. The novel opens with protagonist Benjamin Becker on a plane bound for his hometown to deal with the dispersal of his father’s estate. Divorced and at a crossroads in his life, Benjamin has a head full of questions: “What was the meaning of life? Why ere we all put here to endure physical existence? Why did people have to die? Why was honesty so damned hard? Was true love ever obtainable if people continued to lust after seemingly greener pastures?” Though the novel grapples to some extent with all of these questions, the final question is its primary focus. To answer it, Dorchak has his protagonist fall for a flight attendant named Amanda and an apparently imaginary lover named Rebecca in rapid succession. That Benjamin is attracted to both concurrently only adds to his own confusion about the nature of love, and the fact that he attempts to bring Rebecca to life by projecting her personality into a mannequin doesn’t help matters. (Nor does his growing suspicion that Rebecca may not be as imaginary as he first thought.) What emerges from all of Benjamin’s turmoil is a bizarre and mind-bending meditation on love, being, and reincarnation that would feel right at home in an episode of the X-Files. Or maybe the XXX-Files.