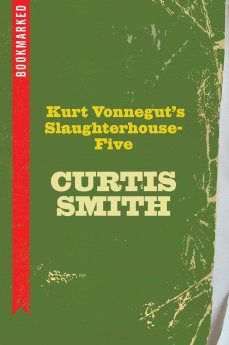 The Bookmarked series, in case you were wondering, is a new line of books from IG Publishing in which lesser-known authors meditate on the impact that various works of literature by better-known authors have had an impact on their lives. Tackling Kurt Vonnegut’s Slaughterhouse-Five in the second volume of the series, Curtis Smith takes a cue from the subject of his investigation and offers what might best be termed an “unstuck in time” reading of the novel. Bouncing from point to point and theme to theme throughout Vonnegut’s novel gives Smith the opportunity to touche on a wide range of topics, including (but not limited to) Ayn Rand, Genghis Khan, SpongeBob SquarePants, PTSD, Heisenberg’s Uncertainty Principle, and the ancient Stoic theory of Ekpyrosis, which holds that the universe is destined to be consumed in flames only to recreate itself from the ashes. Yet even as Smith’s musings careen from one topic to the next, he never loses sight of the thread that holds them all together. Indeed, if the central question of Vonnegut’s novel was how to write about a massacre, the central question of Smith’s extended essay is how to write about a book about a massacre. The big difference, of course, is that where Vonnegut could only conclude that there’s nothing sensible to say about a massacre — nothing, that is, beyond the plaintive Poo-tee-weet? of singing birds — Smith finds that there’s plenty to say not only about Vonnegut’s novel in particular, but also about writing in general, and its place in our efforts to make sense of the chaotic world around us. We are capable of great savagery, it turns out, but our saving grace is that we’re ultimately a kind, compassionate, caring species. So, yes, we are doomed time and again to witness and sadly participate in conflagrations large and small, but we’re also party to the kindness and curiosity that allow for new life to emerge from the destruction we wreak. In this engaging take on Vonnegut’s classic anti-iceberg novel, Smith comes down solidly on the side of humanity, for better and for worse.