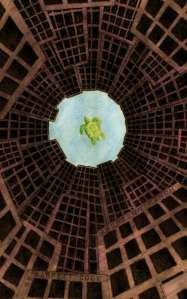 Garrett Cook does not exist. I know this for two reasons. First, the front matter of “his” latest novel, Archelon Ranch, explicitly states that “All characters in this publication are fictitious. Any resemblance to real persons, living or dead, is purely coincidental.” Second, Garrett Cook is a character in this novel. Confronted with these facts, one cannot help but draw the conclusion that this is a book whose author does not exist, at least not in the real world. Rather, the author is a fiction. A fiction, moreover, who has written a book. A book, moreover, that exists in the real world–and which, by the way, offers one hell of a mind-bending read. It is, in other words, a book written into existence by its own characters or, more broadly, a book that has written itself.

If you follow my logic so far, you’ll love this novel. If you think I’m being a bit too clever for my own good… well, there’s always Twilight.

Archelon Ranch opens with its (likely) protagonist insisting, despite all evidence to the contrary, that he is not a hat. That he does all of this insisting in French is only mildly outlandish, given that he is, in fact, at least for the moment, a hat. Or at least he has come to inhabit a hat as part of a quasi-scientific effort at fending off an epidemic of green mud that turns anyone who comes in contact with it into an unbridled, hairy Id.

At least I think this is what’s going on.

Things get complicated in chapter two when the protagonist’s brother, Clyde, interrupts his commerce with an army of rooftop orangutans to insist that the (alleged) protagonist is, indeed, the protagonist of the story. Clyde, it turns out, is a lapsed member of the church of the Narrativity (or something like this). In other words, he really wants the book to make sense. Which it does. In a wild, loopy, nonsensical kind of way. But in order to make the book make sense, he needs to discover its hero, who may or may not be the erstwhile hat, whose name (as I should have mentioned) is Bernard.

Even as Clyde champions Bernard, however, their competing narratives set up an interesting tension within the novel. To wit: who is the book’s true protagonist? This issue worries Clyde to no end but has little effect on Bernard, who is too busy resisting the urge to turn back into a hat (among other things) to worry about such matters as the nature of fiction and its relationship to objective reality. At the same time, however, it should be pointed out that these matters are also all that Bernard worries about; he just doesn’t realize it as literally as Clyde does. Ironically, Garrett Cook, the aforementioned non-entity who penned this novel, is, at one point, described as someone who hates metafiction.

Towards the end of the novel, Clyde, recognizing that he’s a fictional character, asks a pair of pointed yet fair questions of the narrative in which he’s taking part: “Who could read this? Who could enjoy this?” Although the questions go unanswered, I can honestly say that I both read and enjoyed it. (As opposed to many books that I’ve enjoyed without actually reading. For example, my intimation based on what I’ve been told and the excerpts I’ve read is that I’ll enjoy the aforementioned Twilight books much more thoroughly if I refrain from reading them.) Other people who might enjoy Archelon Ranch are Dave Prior (author of The Yoke of the Horde), Walt Maguire (author of Monkey See), and Marleen Hustead, author of a great short story in which a TV critic is reincarnated as a fire hydrant. Many other people will probably like it, too. Most of these people are probably enrolled in MFA programs.

Written in a style that’s an odd triangulation of Thomas Pynchon, Donald Barthelme, Jasper Fforde, Philip K. Dick, and Jonathan Lethem (Girl in Landscape and Amnesia Moon in particular), Archelon Ranch offers a surprisingly clever and engaging meditation on writer’s block and authorial angst, especially for a book with no real author.