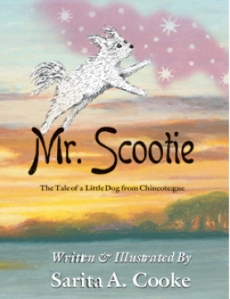 In Mr. Scootie, author and illustrator Sarita A. Cooke offers a whimsical meditation on the challenges of surviving the afterlife.  The narrative focuses on the eponymous dog and his efforts upon waking up in heaven to be reincarnated as an osprey on his beloved Chincoteague island. In many ways, then, Mr. Scootie feels like a new-age version of The Little Engine That Could, as Mr. Scootie’s journey is one that allows him to develop a sense of confidence as he makes his way back to the land of the living. In other ways, however, Mr. Scootie is also reminiscent of The Velveteen Rabbit in terms of both style and tone.

An illustration from Mr. Scootie.

Like the classic tale by Margery Williams, Mr. Scootie is a text-heavy story in the sense that, unlike more recent popular illustrated children’s books, there are significantly more than one or two sentences per page. To put it another way, it’s less of a “children’s book” than an illustrated tale that will appeal to adults and children alike. Along similar lines, the tone of Mr. Scootie is somewhat ambivalent. Early on, Cooke subtly reveals that Mr. Scootie has passed into the great hereafter — an event that’s bound to be at least a little difficult for any pet lover to read about. Likewise, Mr. Scootie’s first steps toward reincarnation are filled with uncertainty and trepidation, and even his eventual return to the land of the living is accompanied by wistful memories of the life he’s left behind. Of course, none of this makes Mr. Scootie less engaging or enchanting. On the contrary, the emotional complexity of the story makes it a tale worth savoring, especially for anyone who’s ever lost a beloved pet.