I’ve been a big fan of Shelf Unbound magazine since its inception last year. Publisher Margaret Brown and her team of literature and pop-culture enthusiasts do a wonderful job of bringing their readers, among other things, the latest news from the indie scene. Fans of Small Press Reviews will especially enjoy their coverage of new books from small and independent presses. And the best thing of all is that the magazine is now available for free! The latest issue focuses on music writing and also includes an interview with author Edwidge Danticat. Enjoy! 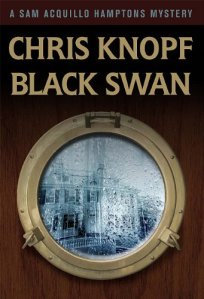 After taking a brief break from his Sam Acquillo Hamptons mystery series with last summer’s glorious paean to the Jersey shore, Elysiana, Chris Knopf returns to form with a whodunit as smart and insightful as it is gripping and intriguing.

Black Swan opens with a bang as Acquillo battles gale-force winds and rough seas to pilot a friend’s sailboat safely to harbor. Yet no sooner does the reluctant amateur detective dock in the exclusive resort town of Fishers Island, New York, than he finds himself entangled in a murder plot of epic proportions. The victim, it turns out, was a partner in a major tech firm poised to reap billions from the launch of the latest version of its trademark software. The only problem is that the product is riddled with bugs — and the only programmers who can fix the problem are prime suspects in the case.

Adding to the pressure are the facts that Fishers Island has all but closed down for the coming winter, the remaining denizens would like nothing more than for Acquillo to disappear, and an autistic programming prodigy has gone missing, taking with him the only real clues in the case. To top it all off, a massive hurricane is about to slam the island, thus ratcheting up the urgency of Acquillo’s investigation. That the man spends much of the novel sucking down vodka and longing for a cigarette is, to say the least, understandable.

As with all of the titles in the Sam Acquillo series, Knopf maintains tight pacing throughout Black Swan while simultaneously combining the best elements of noir and gothic mystery fiction. Many reviewers have noted an affinity between Acquillo and such iconic detectives as Sam Spade, Philip Marlowe, and Robert Parker’s Spenser. Moreover, by isolating Acquillo and company on Fishers Island, Knopf also evokes the claustrophobic tension of Agatha Christie’s Ten Little Indians. What really sets this novel apart, however, is its smart yet subtle commentary on our growing dependence upon technology and the ways in which it is changing the nature of humanity. Though Acquillo deftly brings his murder investigation to a satisfying end, the larger question that haunts the novel still remains: Have we, at long last, been reduced to slaves of technological progress, or do we still have control over the machinations we’ve set loose upon our world?

With Acquillo in our corner, there’s always hope. 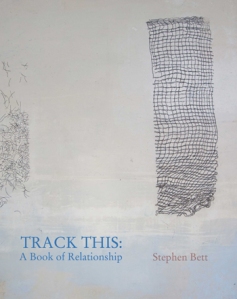 Track This: A Book of Relationship by Stephen Bett is an emotionally generous collection of stylistically spare poetry reminiscent of the work of Ezra Pound and e.e. cummings. As the title of the book suggests, the poetry collected therein tracks the evolution of a single relationship, but it does so in ways that will likely challenge the casual reader to rethink conventional notions of language.

(Parenthetical statements, for example, tend to open without closing. A commentary on the nature of relationships, perhaps? On the contingency of the ties that bind? We enter into these deals with other human beings without knowing how or when or whether they will end. We hope, for the most part, that they will go on forever, but…

(Ah, yes, he uses ellipses, on occasion, too. And, to be sure, some of his parenthetical expressions both open and close.)

All of this is to say that by toying with the conventions of language, Bett draws attention to the ways in which language and relationships are given to the same types of uncertainty. More to the point, his poetry suggests that just as the uncertainty of language — the inability of words to capture the ineffable, the sublime, the exact essence of a moment or feeling or heartbeat — does not stop us from attempting to communicate, the unlikeliness of ever connecting one’s soul to that of another will not stop us from trying. We love because we want to connect, the poems in this volume suggest, and it’s in the attempt, in the grappling we do in the dark among the interstices of communication and amidst the firing of neurons, that we find the agony and ecstasy of all that makes life worth living. 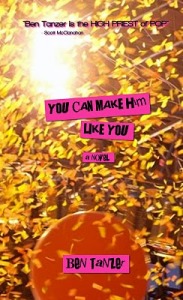 To me, Ben Tanzer’s work reads like a series of precisely delivered suckerpunches, leaving me shucked against the floor disoriented, hurting, bleeding, but wanting more, always more. And throughout the years, Tanzer’s been shadowboxing in the wings, waiting to unleash his next series of literary blows. Recently, he’s released works such as 99 Problems through CCLaP, and Cool, Not Removed through Artistically Declined Press, and again through ADP, a charming book called You Can Make Him Like You.

In You Can Make Him Like You, Tanzer introduces his protagonist Keith in a paragraph crammed with impeccable detail. We learn Keith is an insecure, yet self-aware thirty-seven-year old man, a “cock-sucker” of sorts: “Hello, my name is Keith, and I am a selfish cock-sucker. I am thirty-seven years old. I have longish black hair and what some might call an angular or Roman nose. I live in Chicago, I have a two-bedroom condo in the Gold Coast and I am generally embarrassed to admit the location. I am partial to George W. Bush, love John McCain and try to talk to my parents as little as possible…I have slept with eight people…”

In You Can Make Him Like You, Keith migrates through infidelity, marital tension, therapy, fatherhood, the everyday wear and tear of suburbia: a nag of a wife, a raging midlife crisis that has him sleeping with the intern, throwing fists in a bar, and inexplicably getting belligerent in a therapy session, a service which he claims he no longer needs. Think Rob Fleming’s neuroses from High Fidelity (without the indie music store) crossed with Patrick Bateman’s ability to attract hot women with perfect T&A in American Psycho (minus the chainsaw and brie). And yes, there are moments when Keith is a cocky cock-sucker, “I am on top of the intern,” but he also has quiet poetic moments, “…it is amazingly peaceful up here, the slight breeze, the occasional straggling geese, The Hancock Building and the Sears Tower lurking off somewhere in the distance and the leaves drifting and spinning like little commandos as they float towards the street.”

This is a story of a thirty-seven-year-old man-child wrestling with drab suburbia and reality of being a husband and father (the birth of his child that he seems to look forward to as much as a colonoscopy exam administered without drugs, in a sort of “I have to do this to maintain peace of mind”). As he narrates, “…I wander into the living room and look out onto the street below. Cars pass by. People walk their dogs. And others run. I watch the action for awhile and I am struck that it doesn’t matter what you do or don’t do, life keeps cranking along and you can either be a part of it or not, your call.”

Tensions are high, hooks throughout the book kept me engaged and left me flip-flopping between extremes, “did he or did he not sleep with that random lady? Does he truly love or subconsciously want to run like hell away from his wife, job, life in general? Is he or is he not a hardcore Republican? Now that he has a kid and has found a moment of peace, is this just the eye of his midlife crisis storm or has he wholly accepted his reality?”

You Can Make Him Like You is a coming-of-middle-age story, a departure from things like sleeping with interns and resentment toward his spouse, and acceptance of his current state, the birth of a child, finding beauty and peace in his son, Jones. I think Tanzer tries to make Keith come off as a bad guy but he’s sort of good, good that he doesn’t train wreck his life by taking off with the intern, abandoning his wife and kid, shanking someone in a bar. I suppose Keith turns into the best guy he can be, and he wants to be good, to think he is good, then in a fleeting moment he may be a douche again, but goes back to being good.

As I read this book, I had ah-ha! moments of “I never want to get married or have a kid,” to moments of, “wow, we watch ‘Intervention’ for the same selfish reasons” to extended laugh-out-loud moments: “Drugs don’t make people listen to Hootie and the Blowfish. People do…” and “I am about to answer him when Counting Crows comes on overhead and I have to pause for a moment and decide whether or not it would be preferable to drive a fork into my eye.”

Tanzer has mastered the art of introducing characters, setting scenes, and building tension in a novel made up of flash-fiction-length chapters, following all those “editor’s dream” rules without being stiff or mechanical in his voice delivery. Among writers like Brad Listi and Tony O’Neill, Tanzer’s storytelling ability is something that I covet on a daily basis. I look forward to being bludgeoned again by his future publications.