The start of This Little Piggy Belongs to the Devil is very mundane. It begins with plans for a birthday party. The author gathers together friends and family but he never gives the reader time to know them.  On page two of the text, a horrific fire claims the lives of twin, eleven year old  brothers, the principal character’s only grandchildren.  From that  point the everyday turns black and unsettling. Told in the first person, the speaker, the novel’s unnamed  Grandfather, takes the reader into his own insanity. With painstaking detail, the Grandfather recreates the history of his family and, in doing so, exposes the cracks in his recollections.

Mr. Palazzo employs language in very interesting ways to paint the pictures important to his speaker.  He begins with common and familiar memories.  Christmas concerts, baseball games and fishing trips, family sing-a-longs, childhood pranks and minor disappointments are juxtaposed with his own unyielding belief that evil forces took the lives of his grandchildren.  Nothing is direct or linear in this story.  Mr. Palazzo employs fragments and interrupted thoughts to twist the narrative as he advances a broken timeline and leads the readers into a black hole of hate, vengeance and possible retribution.  More importantly, he peppers the text with favorite television shows and music both to create a sense of familiarity and to chart a decaying mind.  The character describes it as his “journey into mental incontinence.”

Bit by bit, as his mind fails, the Grandfather’s world is consumed with thoughts of revenge. He becomes motivated by anger and a need to turn the clock back to that point when everything was OK. His is haunted by nightmares, bizarre and, at times graphic thoughts of sex, grand revenge fantasies and memories of a perfect life that may or may not have existed. This Little Piggy Belongs to the Devil is a dark and dirty book.  It is vulgar and irreverent.  It is shocking and disturbing.  And, more importantly, it is compelling.  Calling it a page turner may be a cliche but it is certainly a stunning book.

This Little Piggy Belongs to the Devil ends as it begins, with a thought and a whisper. It was everything I wanted in a thriller, and I recommend it heartily. 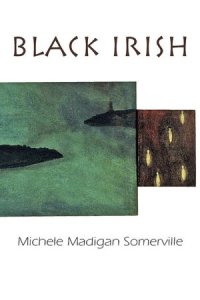 A sense of loss permeates Michele Madigan Somerville’s collection of poetry, Black Irish. Loss of love, loss of youth, loss of time, loss of life, loss of innocence. Yet never loss of hope. The collection opens with a funeral and moves ceremoniously through the gray landscapes of Irish diaspora. There are drinkers who fancy themselves writers, boxers who entertain thoughts of murder, and many nods to the secular saints, Irish and otherwise, of the contemporary world: John F. Kennedy, Marilyn Monroe, Howard Stern, Sarah Silverman, and even Spongebob Squarepants, to name just a few.  Yet if this procession of saints gives Black Irish the feel of a prayer book while the heft of the poems contained therein conveys the gravitas of a lifetime of novenas, the poet’s sly sense of humor lends the collection a natural air of buoyancy. This humor is especially evident in a piece titled “Boob,” which finds the poet meditating on lactation, breastfeeding, and young love: “When my third child came, she knew exactly what to do;/she wasn’t fifteen minutes in the material world/before she started guzzling like a field hand./She was beautiful! I called her ‘Breastina.'” 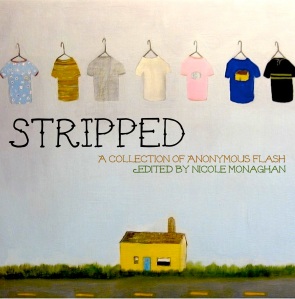 I’m slightly biased with respect to this collection of flash fiction for two reasons: it includes a short piece that I wrote and I designed the cover (using art by one of my favorite artists, Anne Buckwalter). So rather than give a review, I’ll share the copy from the back cover:

Stripped is a collection with a twist. Yes, the fiction contained herein includes works from some of the best-known names in flash fiction as well as the work of emerging writers, but the bylines have been removed so you can’t tell who wrote what. What’s more, the stories hinge largely on gender roles — but with the authors’ identites stripped from their stories, editor Nicole Monaghan has created a bit of a guessing game. Did a woman, for example, write that piece about ambivalence toward motherhood? Or was it a man? More to the point, does it really matter? Or is there something bigger going on when men and women stretch their minds and imagine what it might be like to be the other? Authors include Meg Tuite, Michelle Reale, Myfanwy Collins, Tara L. Masih, Michael Martone, Nathan Alling Long, Curtis Smith, and Randall Brown.

Just a quick note to say that the latest issue of Shelf Unbound is now available. It’s a free e-journal that covers everything that’s great in pop culture, with a focus on all things indie. Definitely worth a click, and I’m not just saying that because one of my reviews appears in the latest issue.