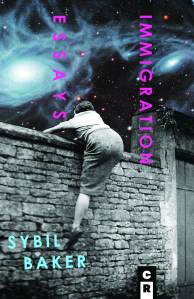 Whether article, novel, or short story collection, Sybil Baker’s writing consistently delivers genuine passion and heart. Her recent collection, Immigration Essays, serves as a fervent reminder that human beings are all a part of “…one single race made up of countless colors, cultures, dreams, ideas, passions, and opinions.” Through the use of personal accounts and narratives, this collection forces readers to rethink conventional answers to the question, “What does it mean to be an expat, exile, or refugee? What can be done for all those oppressed and suffering in unstable economic and/or political environments?”

Baker answers with a variety of stories told through countless people from all around the globe, levying experiences and histories of those oppressed, abused, displaced throughout history from the Native Americans, African Americans, to the Japanese Americans, to those who sought asylum from war, poverty, and violence from countries such as Sudan, Cuba, and Mexico.

Throughout the collection, Baker draws heavily on stories of her own experiences from childhood, adolescence, and adulthood. From her upbringing of eating butter and ketchup sandwiches and chasing the DDT truck, to completely shedding her comfort zone, culture, and all familiarity to live abroad in developing nations, here is a woman determined to wrangle her own version of the American Dream. She challenges what society views as a “woman’s place” by living “outside the social world of marriage, house, family, career,” and goes on to ask controversial questions in order to get to the core of some global truth. Baker dreams across borders whether political, economic, or war-torn, and along the way, gains a worldly perspective entirely different from the average American. She even meets her life partner when their expatriate lifestyles collide in Seoul. Hand-in-hand, they construct a life together separate from the masses, and eventually, settle into a predominantly Black neighborhood that welcomes them with open arms, although Baker herself cannot shake the self-consciousness of feeling “too white.”

There remains an obvious undercurrent of guilt riddled in her personal accounts and admissions. She frequently calls out her privilege of being white, educated, and raised “solidly and predictably American white middle class.” This undertone resonates throughout the entire book, as it must continue to resonate through her present journey. At times, she seems as if she is trying so hard to right the wrongs of the world by immortalizing the voices of those underrepresented and oppressed in print form. Her hope to “do justice to their stories by telling them in a compelling” manner, and offer her “own reparations to redress some of the wrongs.”

“I owe so much to so many. I try to commit to embracing and forgiving this world. But until I begin reparations, I will not be able to forgive myself.”

Baker proves that she is not merely a writer, but a literary humanitarian who reminds us of the greater struggle out there, and urges us to think and even exist beyond our comforts, routines, and the superficialities of the modern world.

“Leaving the States did not save my life as it did Baldwin’s, but in a way it gave me one. I guess I should consider my twelve years in Korea as more of a time of voluntary expatriation rather than chosen exile. I was not escaping anything specific, but I felt more that I was running toward something—a larger way of seeing the world and myself…What living abroad did for me allowed me to live as an outsider and to see the world, forever, in broader terms. It saved me from despair.”

Baker’s content is naturally engaging, and her narrative voice never ceases to impress. She has a natural eloquence in her depictions, and can convey such heart-wrenching beauty in the most tragic of imagery:

“There was no aspirational wallpaper in this last room of this empty house, only notes of hopelessness magic-markered on spotted walls in a room littered with broken pieces of things that could never be put back together. I read the messages quickly, and I do not remember the words. I only remember the content: that life had not turned out as planned, and in fact life had taken people to a dark empty room from which they’d never escape. They could have been notes of suicide. They could have been the ramblings of a junkie. The f-word was used like a comma. They were the cries of people who’d reached the end of the line.”

A collection such as this has never been so direly needed in circulation, especially during such time of uncertainty in this post-Trump / post-Brexit world. Baker’s point of view will force readers to question their own privilege and circumstances, and inspire questions that will continue to challenge the status quo.

So what can be done about the world’s instability and conflict? Is it simply enough to be aware of poverty, violence, and war? Perhaps the answer lies in the obvious notion that no single life is worth less or more than another because of a difference in skin color, language, background, culture, or religion. Whether expat or native, Democrat or Republican, man, woman, gay or straight, we are all human beings who came into this world belonging to the exact same race.