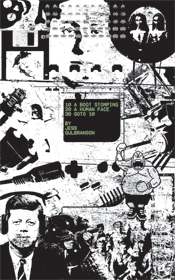 10 A Boot Stomping… reads as if someone cloned an amphetamine-addled Philip K. Dick and told him to come up with his own version of Nick Hornby’s High Fidelity. The novel follows vintage music aficionado and part-time record store clerk Eric Taliaferro as he attempts to save the world from an alien invasion spearheaded by a dead-ringer for Daryl Dragon of The Captain and Tennille fame. Eric, it turns out, has a peculiar penchant for communicating with the dead — most notably rock ‘n’ roll luminaries like Jim Morrison, Elvis Presley, and Joy Division front man Ian Curtis. The dead, however, aren’t especially interested in doing anything for the living, so Eric must ultimately rely on his own wits to stop the villain he can’t help but call “Dragon.”

According the novel’s afterword, author Jess Gulbranson wrote 10 A Boot Stomping… as part of the infamous Three-day Novel Contest (dubbed by its sponsors as “The World’s Most Notorious Literary  Marathon”), and, in some ways, it shows. Most notably, Gulbranson frequently disposes of characters who’ve outlived their usefulness by having them shot — a ploy that’s partially redeemed whenever the protagonist consults the recently-deceased for advice. For the most part, however, the frantic pace at which Gulbranson must have been writing works in the novel’s favor, for the ultimate effect of reading 10 A Boot Stomping… is a lot like riding a roller coaster: it’s a lot of fun as long as you don’t worry too much about what’s holding the whole thing together.